Why is North Carolina Making Sexual Assault Easier? The Mystery of the Bathroom Bill

Unless you have been living under a rock, you have no doubt heard about North Carolina Governor Pat McCrory and his government’s House Bill 2, the Public Facilities Privacy and Security Act. This bill states that people can only use public restrooms and changing rooms corresponding to the gender on their birth certificates.

The point of the bill is to prevent transgender people from using the restroom associated with their gender identity. The rationale is that this protects women and children from the risk of sexual assault in public restrooms.

But it doesn’t. HB2 (and related bills proposed in other states) makes sexual assault easier. Much easier. And it does so in such an obvious way that, no matter how thick-headed, every legislator proposing or voting in favour of it knew what they were doing.

Back up. Is this really a problem?

Well, there are two possible avenues.


Every so often, someone panics over a crime that you have never heard of. Sometimes, it’s a crime that has never actually happened. In discussions of the issue in North Carolina, no one could point to a single case in which a trans woman, or anyone pretending to be one, has assaulted a person in a women’s restroom.

No matter. It was a crisis as far as Pat McCrory was concerned, and he was not about to let its mythological nature deter him from protecting the women of North Carolina. (Next year, they may outlaw the riding of unicorns on state highways.)

Let’s try to imagine scenario #2 for just a moment.

A male sexual offender wannabe decides to assault a woman, and chooses the one location where he will be most conspicuously out of place: a women’s washroom. In order to gain access to said facility, he dresses as though he was MTF trans. Hair. Clothing. Close shave. Makeup. Shoes.

He’s probably not very good at it – and in fact the bill presumes he isn’t. If he “passes” as female, no one will be the wiser and the law won’t make any difference. If he’s not very good at it, he’ll be conspicuous. People will notice him in the area, and remember which way he went.

But now he can’t do that.

Right. He doesn’t need to disguise himself as a trans woman. No need for the dress, the hair, the shave, the makeup, the shoes.

He can disguise himself as a trans man instead.

Under the new law, he can sport a full beard, ripped t-shirt, and blue jeans, and walk straight into a women’s restroom. If he’s challenged, Pat McCrory has given him his story.

“This is the washroom for my birth gender. The governor says I have to use this one.”

Then he can carry out his mission, exit, and walk away. He’ll only be conspicuous for the moments when he is actually going in or out the restroom door.

So much easier. It’s as though the Sexual Assault Association of North Carolina (SAANC) was a lobby group. “Hey, governor, could you make it easier to get into women’s washrooms? These shoes are really a pain.”

Let’s be clear: Trans men are no more of a risk than trans women are. It’s the imposters that could conceivably be a problem – though they haven’t been so far. And they’ve just made the imposter job easier.

How did they miss that?

There are MTF transgender people, and FTM – as everyone knows. Even if you are a North Carolina legislator. Ban trans women from women’s washrooms, and you force trans men to use them. It’s obvious and unmissable. So it wasn’t missed.

The bill has nothing to do with preventing sexual assault. The bill is a straightforward expression of disapproval aimed at transgender citizens, voters, and taxpayers. 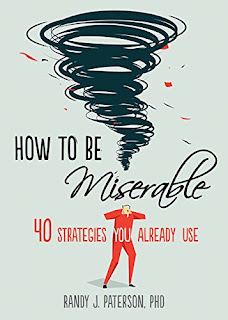 Governor McCrory and his associates passed a bill out of nothing but transphobia, justifying it by saying that they were protecting women while knowing that, if anything, they were making women less safe.

But this wasn’t a problem. The protection of women was never the point. It was just lip service. Again.

My book How to be Miserable: 40 Strategies You Already Use is on sale now at bookstores and online booksellers.


I have now launched a YouTube VLog on psychological topics called How to be Miserable, with new posts every Tuesday and occasional Thursdays! Come take a visit and see what you think. Consider subscribing (just press the big red SUBSCRIBE button on the page) to ensure that new videos appear in your YouTube feed.  Here's the intro video: