How to be Miserable, Take Four: 10 More Plans

On May 1 of this year New Harbinger Publications will release my latest book, How to be Miserable: Forty Strategies You Already Use. In it, I invite readers to contemplate how they could reduce their happiness and life satisfaction if, for some reason, that was their goal. 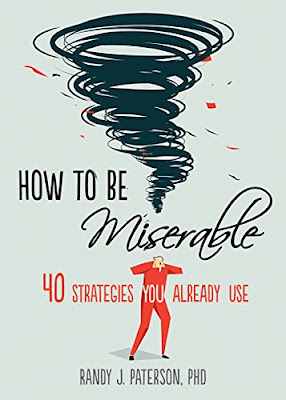 Here are the answers from 10 more attendees at these talks. How do they compare with your own?


How to be Miserable is available for pre-order from Amazon and other online booksellers now.
Posted by Randy Paterson, PhD at 14:50 No comments:

In the late 1980s a colleague of mine told me, over a beer, that she had recommended a new and unorthodox intervention to some of her clients. These were individuals for whom the joy of life had vanished, replaced by a dishwater-grey humdrum existence that left them feeling flat and unfulfilled.

She suggested that when they got up in the morning they should put Prince’s Purple Rain album on, crank the volume, and allow themselves to dance in their underwear as they prepared for the day.

“Allow” is an important word in this. There are some types of music where dancing is not something that must be produced, or forced, or initiated. It is enough to drop one’s embarrassment, shame, and self-consciousness and the dancing will simply happen. Prince’s album, for most people, was firmly and clearly of this sort.

I admired her for her nerve. I was always too cautious, back then, to colour this far out of the lines of standard protocol. As tends to happen, my love of orthodoxy has waned with age.

My friend made no claim that she had discovered a miracle cure. Human lives are difficult and complicated. Most problems require a bit of slogging to get through. But the slogging is easier if you can awaken a sense, however slight, of joy and energy – preferably at the beginning of the day.

There are people, doubtless, who would have been deeply offended by her advice. At the time we talked about it, she seemed to have chosen well. She said that everyone who actually complied with the prescription reported feeling better. Not just while the album played, but for the day.

Psychotherapy often tries to connect people with buried parts of themselves. Often this is done by step-by-step reconnection with life, or by gradually working through the backlog of chores and problems, or by mounting an intellectual challenge to instinctive self-loathing.

Sometimes, though, a different and more direct approach can work wonders. Experiencing a bodily connection with energizing music can be more powerful than all of the cognitive restructuring we can bear. Music, being a human production, can help us tap into the wellspring of shared experience. The energy of a musician like Prince can evoke reverberations of our own buried vitality.

Different people will, doubtless, respond to different musicians or genres. For some it’s Vivaldi, for others Iggy Pop. Some will appeal to a tiny slice of humanity, others to a wider swath. Prince, at his Dionysian and dangerous best, found a potent vein of buoyancy that reached within and set the spinal column vibrating for millions, many of whom responded despite their surface disapproval.

When someone like Prince passes, it can be hard to decide how to mark the event. Is it silly to dissolve into grief for someone you never met? There’s no loyalty in it – and the man would probably not have cared anyway.

Maybe there’s another ritual of which he might have approved. And the required ceremonial objects are as close as your underwear drawer.

Upcoming: My new book, How to be Miserable - 40 Strategies You Already Use will be released May 1. Available for pre-order from Amazon and other booksellers now.

Posted by Randy Paterson, PhD at 18:00 No comments: