This week saw the announcement that Fred Phelps lies near death in a care facility in Topeka, Kansas. (Update - shortly after this was posted, his death was announced.) Phelps is the former pastor of the Westboro Baptist Church in Topeka.

He may also be the one man more responsible than any other person or organization for the widespread embrace of LGBT rights and same-sex marriage in North America.

In case you’ve been living under a rock, this church has the distinction of getting probably more press coverage per parishioner than any other religious institution on Earth. Despite having fewer than 50 adherents, most of them members of Phelps’ own extended family, they manage to be almost continuously in the public eye thanks to their practice of picketing using eye-catching signs saying things like “God Hates Fags,” “God Hates America,” and “Thank God for Dead Soldiers.”

They have picketed concerts, family planning clinics, and, most odiously, funerals. They were present at the funeral of Matthew Shepard, the young gay man beaten and hung to die on a fence near Laramie Wyoming in 1998. More recently, the organization (to call it a “church” risks slandering the religious) took to picketing the funerals of soldiers returning from overseas wars, using the reasoning that God so disapproves of American liberalism (especially its acceptance of gay and lesbian citizens) that he desires and celebrates the deaths of its servicemen and women.

Phelps and his family became notorious both for their extreme views and for the heartlessness of their actions. Apparently never physically violent, they have practiced a form of psychological violence upon their targets through actions from which the general population shrinks in revulsion.

And there, in that revulsion, is the group’s influence. If the church ever actually convinced anyone that they were in the right, it was surely a rare case. Even among the extreme religious, the actions of Phelps and associates are reviled. Far more people are repulsed by their actions than attracted to them.

Social movements benefit from public figures in two main ways. First, and most obviously, having an admired public figure (Desmond Tutu, Nelson Mandela, even Tina Fey) on your side causes others to consider joining in. If I like Stephen Lewis, and Stephen Lewis likes Cause X, then maybe I should view Cause X in a positive light.

But there are also negative examples. If Adolph Hitler loves Rice Krispies, and I dislike Adolph Hitler, then I might question my love of Rice Krispies. If I can’t bear Fred Phelps, and Fred espouses certain views of social issues, then I might tend to rethink and move away from those views. Phelps is uncomfortable company to keep.

Which of these two influences is more powerful – the positive or negative role models?

We’d like to think that the admirable always wins out over the foolish, but it probably depends on the potency of the model. The potency of Westboro’s imagery and actions is powerful.  Imagine picketing someone’s child’s funeral and calling this a religious act. Even the Jerry Falwells, the Pat Robertsons, and the James Dobsons of the world didn’t and don’t do such things and one cannot imagine them endorsing such actions.

The actions (the means, if you like) of Phelps and Westboro are undeniably hateful, and no one could defend them no matter what the consequences might be.  Let’s take that as given.

But consider the ends. Not the purposes they've aimed at, but the actual ends: What did they really achieve? They provided such a potent image of homophobia that anyone espousing similar views had to confront those images. “Am I like that? Do I really believe the same things as these people? Is this the kind of hatred I stand for?” Social conservatives the world over saw a real-life depiction of hatred  and shied away from it. It became impossible not to think about the logical consequences of some of their attitudes.

As for people working to broaden support for gay rights and same-sex marriage, Fred Phelps was a godsend. He became the poster boy for homophobia, a hobgoblin to display to the world. Generally the pictures of his protests were accompanied by disclaimers. “Most people who disagree with gay rights aren’t like this; Phelps represents the far extreme only and his ‘church’ is miniscule.” But the pictures were powerful. I have used them myself at workshops (with the disclaimers), and there are always sharp intakes of breath when the images hit the screen.

Phelps and his followers became cartoon bogeymen for the culture, showing the consequences of a too-literal interpretation of Leviticus. Christians surely tired of having him held up as an example of their faith, which was always a bit of unfair slander. Like holding up Joseph McCarthy supporter Roy Cohn as a representative example of gay men, or Justin Bieber as representative of heterosexuals.

But oh, did they attract attention. People presenting plays or movies on gay issues would secretly hope the church would come and picket, bringing thousands of dollars of free publicity along with them.

A Massachusetts organization began the practice of holding Phelps-A-Thons, much like walkathons, in which people would pledge to donate a certain amount of money for every minute they picketed.  Thousands of dollars were raised for charities and social action groups.

Here’s a video of the organizer, Chris Mason, chatting with Phelps’ daughter Shirley about the fundraisers. She pulls no punches, issuing such a constant stream of nonsense that it's hard to imagine how anyone could ever satirize the family - the video looks like a put-on as it is.

In the classic Frank Capra / James Stewart film, the protagonist gets a chance to rewind time and see what the world would have been like had he never been born. Surely most people who have seen the film have conducted this thought experiment for themselves. “What would have been different if I wasn’t in the world?”

So what if there were no Fred Phelps or Westboro Baptist Church? Would the world be as far along the path to inclusiveness?

It seems impossible to believe that their impact has been anything but beneficial for progressive and socially-inclusive causes.  They have been the gift that has kept on giving to anyone hoping to combat homophobia.

So who has been more influential than them? You always want to reward supporters and positive models, and it would be nice to say that the best influence comes from someone on your side. But who are the nominees?


Who was the most influential? We’ll never really know, because we have no Clarence the Angel and cannot try out universes without them. But can we really say that any of these positive models (or any others we might name), admirable though they might be, have had as powerful an effect on public opinion as the toxic example of Fred Phelps?

A colleague once mused that Westboro might be secretly funded by a devious millionaire hoping to prod society toward greater openness and acceptance – and that if this wasn’t the case, maybe it should have been. Perhaps Phelps was always a secret mole working for LGBT rights; a kind of poison pill for the religious right. But of course this would mean funding and promoting Westboro’s revolting means as well as the pro-social results, and Westboro’s means are too hurtful to countenance. Surely no group, left nor right, funneled money to this group. They did it all on their own.

So no. No one is going to sing Phelps’ praises, nor argue for a continuation of Westboro’s victimization of the bereaved. But perhaps we can acknowledge – or consider – a painful possibility. Fred Phelps may have done more for the LGBT community and for marriage equality than anyone in history.

With enemies like him, the future got more friends.

UPDATE; The nature of hatred is that it sparks hatred in return, potentially poisoning the people it targets and turning them into mirror images of the person who began the cycle. Phelps was such a source of hostility toward the LGBT community that mention of Westboro would spark vengeful rage in many.

When he died, many wondered if people he had targeted would mock his death the way he had mocked the deaths of others: "Rot in hell, Fred" or "God hates Phelps." Or would people escape the trap?

Sure enough, signs and protesters appeared. Here's a sample: 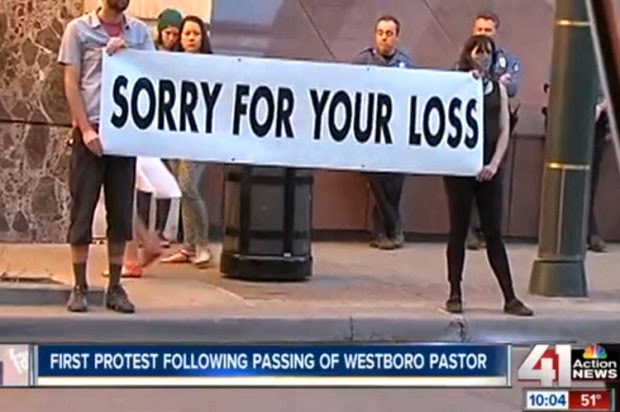