This week I’ve regressed to the traditional “What I did for my summer holidays” theme, as I suspect everyone has had more than their share of psychology.

Yoho is perhaps most famous for its least impressive sight, the spiral tunnels. When the Canadian Pacific railway was built in the late 1800s, the designers opted for Kicking Horse Pass, which has a sharp steep slope that initially required a 4.5% grade. This wiped out the first train to attempt it, and eventually they constructed a pair of tunnels that entered Mount Stephen, looped inside the mountain, and emerged higher up. A great engineering feat, but the “tah dah” watching trains go through the tunnels is actually not so astonishing.


Yoho is great to drive through. For one thing, if you’re going east it means you survived the worst stretch of the Trans Canada Highway between Golden and the park (they’re trying to do something about this, but they have a long way to go).

The real attractions, though, are off the highway. One of the best, I understand, is the Lake O’Hara  hiking area. This takes more organization than I could muster driving back from an Alberta family wedding, so I didn’t see it. You can hike the 11km access road to the area, or you can advance-book a public bus that drives you in, allowing you to hike directly from there, camp at the small campground, or stay at the luxury lodge there. The daily quota for the bus is 42 people to ensure the area is not over-run. Maybe next year.

This year we stayed in the tiny (200 people or so) former rail town of Field, home of the park’s visitor centre. Every house there seems to be a B&B or backpacker lodge. We booked the Canadian Rockies Inn.

Let’s stop there for a moment. Imagine what something with that grand name might look like. Towers? A Fairmont Chateau like the Banff Springs? Actually, it’s a brick split-level ranch-style house that used to serve as the town’s RCMP station and has only three huge rooms presided over by Luc the proprietor, who takes time to give copious advice on what to do, where to hike, and anything else you want to know about the park. (I’d stay there again in a minute.) 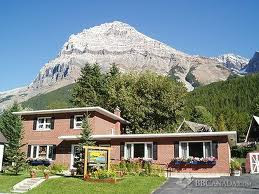 British Columbia towns can sometimes be a dead zone for food, but Field has a great restaurant, Truffle Pigs, that rivals anything Vancouver has to offer. Even if you’re just driving through, this is enough to make Field a destination stop. And it’s half the price it would be in any city.

So if you’re too disorganized to have pre-booked the O’Hara bus and too lazy to walk 11 km to the trailhead, what do you do?

Wapta Falls is a short (4.6km return) flat hike near the western border of the park to a 30m drop in the Kicking Horse River. Easy and a nice payoff for small energy investment.

Emerald Lake, near Field, has a beautiful bring-your-wallet lodge composed of duplex cabins on a peninsula jutting into a stereotypically turquoise lake. There are restaurants, a 5.2 km circuit trail of the lake, and canoe rentals for a ridiculously Canadian experience. We rented one for an hour, which is about all you need.

Then there’s Takakkaw Falls. Yoho Valley Road, just east of Field, leads upward in a fairly civilized way to a set of very steep, narrow switchbacks, beyond which is a great drive through a mountain valley to the falls and the trailhead for the Iceline, which was our destination.

When we got to the falls there were full-size tour buses in the parking area. How did they possibly turn to get up the switchbacks? (Driving a standard-sized vehicle I had to reverse at one point to get around one of the bends.)

The falls are worth seeing, a 254 meter free-fall drop down a rock cliff. Visitors can walk almost to the base, where the falls are more like rain.

The Iceline Trail is billed as one of the best hikes in the Canadian Rockies. We got up above the treeline following the trail from the Whiskey Jack Hostel close to the Takakkaw Falls area. Then, inevitably, a lightning storm came up and we retreated back from the exposed top. Next time for sure.

Yoho may be smaller than Banff, but it gets much less press and so is much less of a tourist circus than Banff and Lake Louise (both great places, but packed for much of the summer). My impression was of only a few hundred visitors within the park while we were there during primetime summer holiday season. For example, we saw only two people (I think) on the Iceline trail while we were on it.