Every Canadian knows at least a little about the bleak history of the residential schools. Children of First Nations families were forcibly removed from their families and made to attend these schools, often in communities far from home. The schools, it turns out, were rife with physical and sexual abuse of the children. Even had they not been, the simple act of forcibly splitting up families was damaging enough.

Non-native people know the story, and most shake their heads at the policy. But without first-hand experience it can be hard to really understand or connect with what happened. Few Canadians have seen even a single artifact from that time.

A friend of mine recently posted the letter reprinted below. No letter can encompass what happened in this country, so inevitably it provides only a tiny snapshot of the attitudes of the period. But I found it telling of the paternalism and condescension of the residential school policy in its casual assumption of authority and generosity of bestowing upon parents the privilege of seeing their own children.

Read it and see if a chill doesn't run up your back. 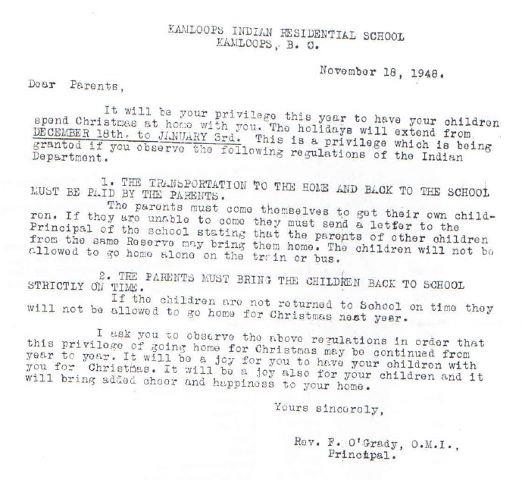