Readings. Crazy Like Us: The Globalization of the American Psyche. Part One. 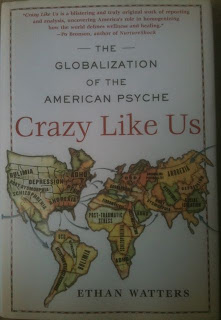 We’ve all heard about culturally specific psychological disorders.  Amok, for instance, in which affected Indonesian men withdraw and eventually explode in rage.  Or koro, also specific to parts of Asia, in which men (again) develop the belief that their genitals are receding into the body.

And we know that there seem to be fashions in the expression of disorder.

Women no longer experience hysterical paralysis as they often did in Victorian Europe.

Hebephrenic schizophrenia, characterized by hysterical laughter among other symptoms, is almost unknown today.  But in the early to mid 20th century it was virtually emblematic of madness.  I’ve never seen a case; most modern clinicians haven’t either.

If manifestations of mental distress vary over time and across cultures, how do they shift?  And can cultures contaminate one another, causing manifestations to spread from one to another?

In Crazy Like Us (2010, Free Press), Ethan Watters (who previously excoriated the mental health field with Making Monsters, an analysis of the satanic ritual abuse hysteria of the 1980s and 1990s) looks at the apparent spread of Western – and specifically American – manifestations of mental illness into other cultures.

He suggests that when people are distressed, the form that their symptoms take will be dictated by cultural understandings of what happens to people in untenable situations.  If people in the culture develop glove anaesthesias, you might too.  If they become bulimic, that may be what you experience.

He argues that the rise of American ideas about mental illness, and specifically a belief in the reality of the categories provided in the American Psychiatric Association’s Diagnostic and Statistical Manual (DSM; currently in its 4th edition, hence DSM-IV) is causing a shift in the way that mental illness appears in other parts of the world.

Watters focuses on four national case examples of this phenomenon:  Anorexia in Hong Kong, PTSD in post-tsunami Sri Lanka, schizophrenia in Zanzibar, and depression in Japan.

In this and the next few posts, let’s take a look at his arguments.

In interviews with local experts, Watters establishes reasonably well that before the early 1990s anorexia was a rarity in Hong Kong.  When it appeared, it tended to be a response to traumatic experiences of various sorts.  The women – and they tended to be women – seldom if ever reported feeling fat or wanting to change their appearance.  Instead, they reported not feeling hungry and sensing a kind of “blockage” that prevented them from eating.

In November of 1994 a schoolgirl with this problem collapsed and died on a busy street.  She turned out to weigh 75 pounds.  The event attracted major attention from the media, who naturally turned to experts on the problem for background.  Overwhelmingly, the experts they chose were Western.

The experts discussed the manifestations of anorexia common in North America, including the fear of fatness and the presumed cause: a societal obsession with thinness, particularly for young women.  Awareness programs sprang up to catch cases of anorexia earlier, to support the sufferers, and to educate young women about the dangers of the problem.

Over the next few years, the clinicians who had treated the few pre-1994 cases noticed a sudden upsurge in the incidence of the problem.  And the disorder seemed to change.  Suddenly young women were presenting with American-style anorexia.  Anorexia researcher Dr Sing Lee reported that 80% of the new cases were now fat phobic.

What are we to make of this?

One possibility is that fat-phobic anorexia occurred with about the same frequency pre-1994, but that clinicians simply failed to recognize it.  This seems unlikely, however.  Anorexia is relatively noticeable by physicians and, left uninterrupted, can cause death.  Deaths tend to attract attention.

Alternatively, clinicians may have changed their practices in the light of American data.  Perhaps they asked about fat phobia more routinely, and noticed it as a motivating factor as a result.  But this doesn’t explain the increased number of cases, and one doesn’t generally need to ask about fat phobia in order to get the story.  All we need to do is ask the client “Why do you think you don’t eat more?” and we will turn up the answer in at least some of the cases.

Or perhaps Hong Kong society itself was changing.  Perhaps there was a sudden upswing in the portrayal of thin models, or a sharp increase in the penetration of North American thin-model imagery. If so, no one seems to have noticed a change as anything more than a gradual shift over time, if that.

It’s hard to escape Watters’ conclusion, which is that cultural awareness of anorexia as a phenomenon caused at least some of these young women to manifest their distress by becoming anorexic.

But there’s something missing from his treatment of the topic.  He assumes that cultural ideas influence the manifestation of anorexia, but doesn’t consider whether they affect the incidence of mental disorder overall.

If distressed girls suddenly began becoming anorexic in the1990s as a language of dissatisfaction, then there should have been a corresponding decline in other manifestations.  Was there?  This isn’t addressed.

If there wasn’t, then there may be an even more significant problem than the one Watters is discussing.

Could it be that by publicizing anorexia, and describing it as a societal problem, we may create the problem in more young women – including women who would not have had an alternative disorder if anorexia were not available?

It’s not inconceivable.  There are well-documented cases of mass hysteria in school and community settings, in which large numbers of people suddenly come down with various physical symptoms.  No one believes that if the psychological contagion (the belief in a virus or toxic substance in a building, for example) was not present, the same number of people would have come down with something else.   It is not the type of case, but also the number of cases that is influenced by the belief system.

This raises the disquieting possibility that North America may be influencing not just the form of mental illness (“craziness like our craziness”) but also the amount of mental illness in a culture (“we’ll add our disorders to yours”), in a manner reminiscent of the way that European illnesses were introduced to, and spread among, the aboriginal peoples of the Americas.

More on this later.  Next up:  PTSD in Sri Lanka, followed by Schizophrenia in Zanzibar and Depression in Japan.
Posted by Randy Paterson, PhD at 09:00